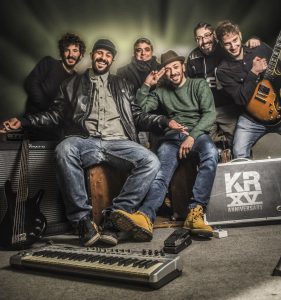 The band formed during the summer of 2001 in occasion of parties and dance halls in Basilicata, on the beaches of the Ionian coast. The use of the bernaldese dialect and the reworking of Jamaican music are the elements that create a spontaneous and creative impulse in the Krikka Reggae’s guys, who can put together in no time a  great reportory of original live songs.

In the early years the band has had a significant growth with tangible results. In 2004 Krikka Reggae is awarded Best emerging reggae group at the Italian Reggae Contest sponsored by Rototom Sunsplash. Throughout the summer the band had been partecipating  to different festivals opening for important national and internationals artists (Buju Banton, Sud Sound System, Bandabardò, Africa Unite, Junior Delgado,..).

In 2019 the band is back after a one-year compositional break producing a special project: a song called WE ARE ONE. The track is the result of a musical journey of the band together with young people seeking asylum in Basilicata. The song in collaboration with Arci supports the work of Mediterranea saving humans.

To register for this event please visit the following URL: https://www.eventbrite.it/e/biglietti-krikka-reggae-327908321617 →