Like the waves of the sea. Logbook from an humanitarian experience by Valentina Brinis.

Like the waves of the sea. Logbook from an humanitarian experience by Valentina Brinis 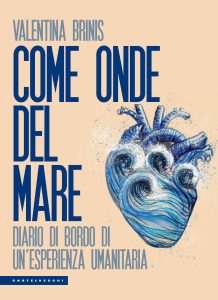 A search and rescue mission aboard of an Open Arms’s ship, lived and told firsthand from an aid worker, and her report on the social emergency situation in Rome. Through the professional point of view of someone who works everyday with Institutions in order to help the outcasts to find their place in a society that still rejects them, Valentina Brinis tells the dramatic stories of migration from the often neglected perspective of rescuers and social workers from land. The experts, the young volunteers and the sailors who spend their time rescuing and welcoming, are fighting against the indifference and lack of support from the government, hampered by cynicism but supported by folks’s kindness. A personal yet universal journey through a dark chapter of our contemporaneity led by someone who can put their ability at the service of the larger community of human  beings.

To register for this event please visit the following URL: https://www.eventbrite.it/e/biglietti-come-onde-del-mare-diario-di-bordo-di-unesperienza-umanitaria-325024425807 →