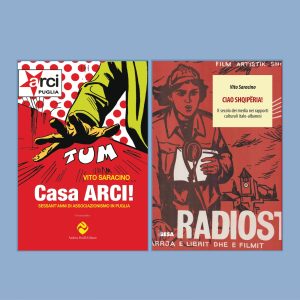 Rediscovering stories: from the discovery of Italy through media by Albanians to the spontaneous role of Arci in Apulia as a welcome landing place

Two parallel stories that meet in 1991, year zero of the discovery of Italy as a destination for migration.

From that moment on, nothing is the same as before, the implosion of the Cold War world means that two nations so close but so distant collide-know each other-learn to live together and Apulia and its associative fabric become intertwined with the impetuous arrival of Albanian emigration. Italy and Apulia became the first pole of attraction for proximity and affinity of the largest migrant community of the 1990s, Albania.

Together with the historical researcher of the Gramsci Foundation, Vito Saracino, we will try to relive two parallel stories, that of the Albanian people fascinated by the glare of the Western lights and consumerist Italian media, and that of Arci in Apulia, which was overwhelmed by the events of history and found itself implicitly transforming its mission by focusing on welcoming migrants.

In the square of Sabir with the presentation of volumes “Ciao Shqiperia! Il secolo dei media nei rapporti culturali italo-albanesi” by Andrea Pacilli Editore and “Casa Arci! Sessant’anni di associazionismo in Puglia” Besa Muci edizioni we will go backwards together with the author to look at the stories of Albania and Apulia with new eyes, “so near and so far” to discover the reasons for a closeness that overcomes borders, dictatorships, condemnations, exile, torture and deprivation.

Two positive stories of one of the most integrated communities in Italy and an association that has managed to carve out its historical space by being among the promoters of the Primavera Pugliese, participating in that cultural movement that has made the Apulia brand among the best known in Italy.

To register for this event please visit the following URL: https://www.eventbrite.it/e/biglietti-riscoprendo-storie-336555696147 →